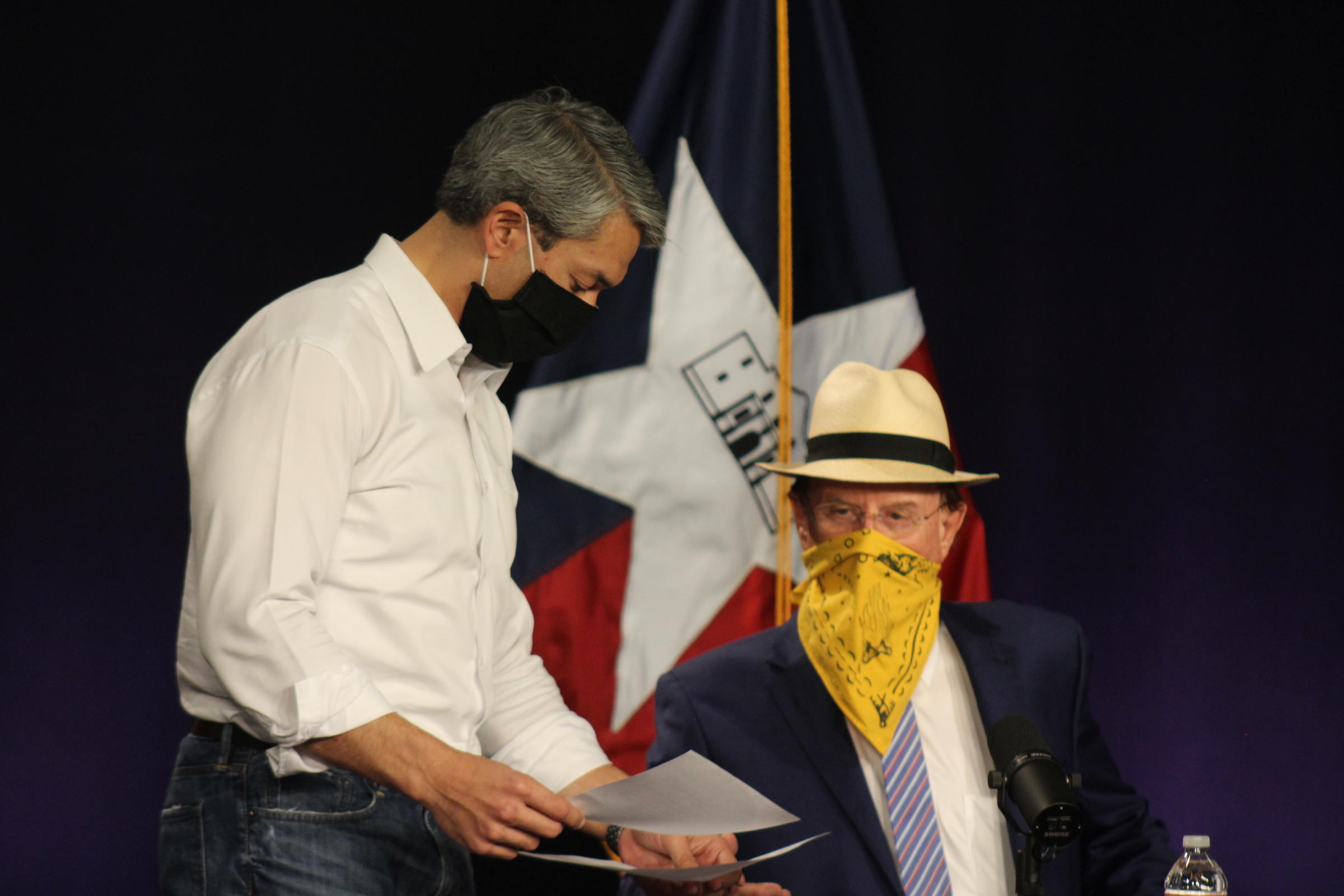 Before I get to the judge, local numbers are encouraging.  Hospitalizations are down.  Percent positivity is still high, but fewer patients are opting to be tested.  That may mean that fewer people are sick or they are just frustrated by the long time that it takes to get test results back. It will take a long time to get that to drop to the desirable 5%. In any event we must continue to wear masks and socially distance because the risk will go up with the Labor Day weekend and kids going back to school.

I criticized Judge Wolff for his preferred form of facial protection.  Apparently, I was not the only one.  The following is his response in an article from TPR. I think if he is going to argue with people in public he should up his game and set a good example.

Masks are the crucial weapon in the fight against COVID-19, and men, women and children of all ages wear them throughout their daily lives. But Bexar County Judge Nelson Wolff prefers bandanas, which make him stand out in a crowd of masked citizens and officials. The style choice makes sense for a county leader whose personality has been as much a defining aspect of his approach to the outbreak as his decisions have been.

The Democrat has received a few lectures, including from some well-meaning family members, about the bandanas. Some studies show three layered cloth masks offer more protection, but Wolff, who is nearing 80 years old, explained that he wears his bandanas in multiple layers.

Wolff explained that he generally prefers bandanas because they cover more than his mouth and nose. However, he added, he does wear regular masks too, especially on hotter days.

“My view is if you are going to be around a lot of people, probably wear the safer one,” he said, referring to regular masks.

The specially-folded bandana was just one aspect of Wolff’s daily workday routine, which he has occasionally detailed during the weeknight press conferences in recent months.

He’s explained that his days typically begin around 6 a.m. Wolff jogs for two miles, and then he catches up on the latest news. He’s ready for the day by 8 a.m.

He participates in four or five online Zoom meetings on some days. Commissioners still meet in person but their desks are six feet apart.

Wolff has said he tries to get out of the office on a regular basis, but he avoids large crowds when he does. His favorite stops are to the grocery store and to home improvement stores.

He’s explained that he enjoys having lunch at local restaurants to support them through tough economic times.

Wolff recently reported that he tested negative for COVID-19. He half-joked at a recent press conference that some people have wondered, given his age and public activiities, why he has not tested positive for the virus.

“Partial immunity that I might have. It might be my genetics,” he said. “I have strong genes … maybe that’s why. Or maybe there’s some memory T-Cells in there that are a part of my immune system that recognizes when I got an invasion and stops it. Or if I had an infection and didn’t know it, maybe my antibodies are not protecting me.”

Wolff added that he thought the reasons for some getting sick and others remaining unaffected after exposure to the virus were among the many mysteries of COVID-19.

“We don’t know for sure why so many of us are healthy and may have got it,” he said. “I guess we are fortunate to be that way, but we still have to remember even though we are that way, we can still transmit if we had it and didn’t know it, and that’s why I’m getting the lectures on what face mask is best to use.”

He said that during a recent visit to a local restaurant, several people thanked him for his leadership during the outbreak.

Wolff has appeared most weeknights with San Antonio Mayor Ron Nirenberg and Metro Health officials on the city’s web channel TVSA to brief residents and the media on the county’s fight against COVID-19 and the toll it has taken on the community. The event is streamed by local television and radio news stations, including Texas Public Radio.

Wolff grew up in San Antonio playing baseball. He graduated from St. Mary’s and St. Mary’s Law School. He is the former owner of Sun Harvest Farms, a health foods grocery chain. Before becoming county judge, Wolff served in the Texas House and Senate, sat on the San Antonio City Council, and was mayor of San Antonio from 1991 to 1995. He has served as county judge since 2001.

He is married and has four children, including Kevin Wolff, a Republican who sits alongside his father on the Bexar County Commissioners Court.

In the meantime, Wolff will likely continue his routine of jogs, lunches and bandanas … most of the time.

Brian Kirkpatrick can be reached at Brian@tpr.org and on Twitter at @TPRBrian.

TPR was founded by and is supported by our community. If you value our commitment to the highest standards of responsible journalism and are able to do so, please consider making your gift of support today.