Do I Need a Covid 19 Vaccine Booster? 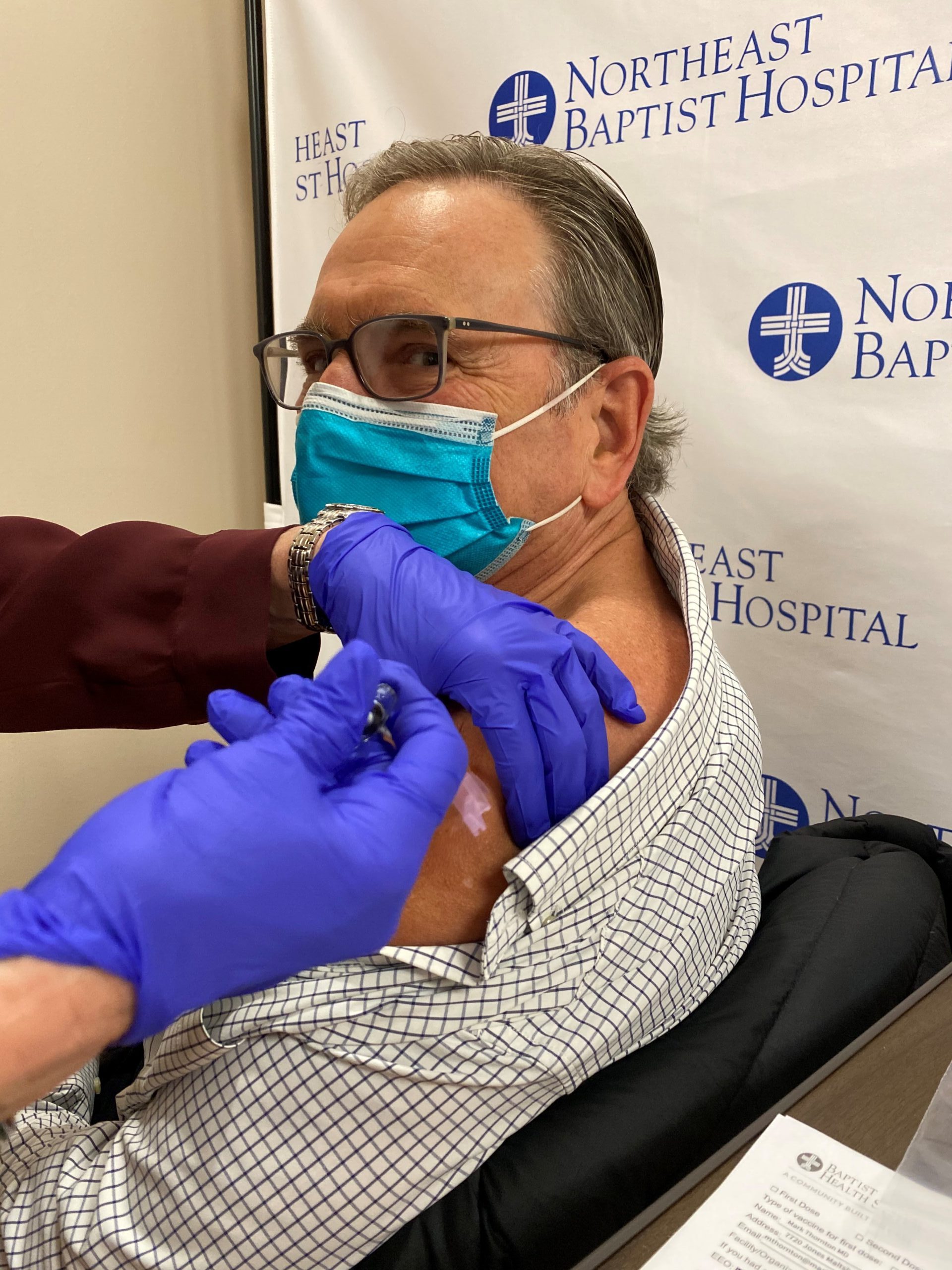 First of all, I in no way meant to imply that the Texas Cavaliers were responsible for the bump in Covid 19 cases.  That would be a stretch.  I think that the people of San Antonio were anxious to celebrate a return to near normal. Whenever lots of people get together, it is inevitable that the risk of disease transmission goes up.  Most of the Fiesta events were outdoors which greatly mitigates the risk of transmission.

The Cavaliers put on a great parade and distributed about $3 million dollars to children’s charities.  And Phil Bakke was a great king.

As the article below mentions, Pfizer plans to get authorization for a third dose of vaccine.  That’s not surprising. It was anticipated.  Whether it is needed remains to be seen, but if it is proven to be effective and their evidence passes the intense scrutiny that vaccines are subject to, they want to be ready.  They also stand to make a lot of money.  If it is needed  will be determined not by them but by the FDA.  Following that is another article from the Washington Post which discusses the issue in greater detail.

The Hill (7/8, Sullivan) reports Pfizer and partner BioNTech plan to seek FDA authorization “for a third dose of their COVID-19 vaccine, saying it would provide even stronger protection.” In a statement released Thursday, the companies “said they have seen ‘encouraging data’ from an ongoing trial of the booster shot, adding that it provides levels of neutralizing antibodies five to 10 times higher, when administered six months after the second dose. The companies plan to submit data ‘in the coming weeks.’”

According to USA Today (7/8, Weintraub), the companies’ booster shot “strongly extends protection,” and the partners “are developing a vaccine targeted directly at the Delta variant.”

Carolyn Y. Johnson  1 day ago
An unusually public spat has broken out between the makers of one of the coronavirus vaccines and federal health officials over whether booster shots will soon be needed, a dispute that comes against the backdrop of renewed concerns about the pandemic.

© SeongJoon Cho/Bloomberg A two-shot coronavirus vaccine from Pfizer-BioNTech was authorized for emergency use last year by U.S. drug regulators. (SeongJoon Cho/Bloomberg)Pfizer and the German firm BioNTech announced Thursday they plan to seek regulatory clearance for a booster shot within weeks, predicting that people would require a vaccine boost six to 12 months after being fully immunized. Hours later, the Department of Health and Human Services issued an emphatic rebuke, saying “Americans who have been fully vaccinated do not need a booster shot at this time.”

The disagreement surfaced as the world is roiled by the highly transmissible delta variant, which has destabilized plans to fully reopen some countries and intensified an ongoing scientific debate about when and whether booster shots will be needed.

South Korea, a country that has handled the pandemic well but rolled out vaccinations slowly, now faces what may be its worst wave of cases and implemented its highest level of social distancing restrictions this week. Japan banned spectators from the Tokyo Olympics after rising infections fueled by the delta variant. A surge in Portugal triggered a curfew and restrictions in many cities. Israel announced that as delta took hold there, the Pfizer-BioNTech vaccine kept people out of the hospital and prevented serious illness but was far less effective at fending off milder cases.

The HHS statement did not mention Pfizer by name but said “a science-based, rigorous process” headed by the Centers for Disease Control and Prevention, the Food and Drug Administration and the National Institutes of Health would determine whether boosters were necessary. The decision, the statement said, will be only partly informed by data from drug companies. It underscored that the current data shows fully vaccinated people are protected against severe illness, even from the most challenging known variants.

Pfizer’s chief executive has for months predicted that boosters could be needed within six to 12 months, seeming to offer certainty on a question that has captured public interest even as public health officials and academic scientists said it wasn’t clear yet when a booster would be needed. While some variants can slip by elements of the immune defenses mustered by vaccines, multiple lines of data have shown that fully vaccinated people remain well-protected against severe illness, hospitalization and death.

All the pharmaceutical companies involved in making coronavirus vaccines are working on formulating and testing booster shots to prepare for the possibility that immunity fades or a new variant capable of totally escaping vaccines emerges — steps that experts agree are prudent and wise.

But on Thursday, Pfizer released a statement indicating the time was near. The company said its vaccine’s effectiveness had eroded, citing two lines of evidence that outside scientists have yet to see in detail.

That includes an Israeli government analysis showing that as the delta variant became dominant there, vaccine efficacy dropped to 64 percent against infection or symptomatic illness, although it remained more than 90 percent effective against severe illness. The study has not yet been published, and some outside scientists have questioned how much weight to put on an analysis that has clear limitations. Pfizer also cited its continuing follow-up of people who were vaccinated last summer.

“While protection against severe disease remained high across the full 6 months, the observed decline in efficacy against symptomatic disease over time and the continued emergence of variants are key factors driving our belief that a booster dose will likely be necessary to maintain highest levels of protection,” Pfizer said in a statement.

The drug company said it would submit data to regulators within weeks showing that a booster at six months — a third shot of its original vaccine — caused antibody levels to shoot up five to 10 times higher than the original two-dose regimen. Moderna announced data from similar trials in May.

Pfizer also announced it would begin testing a booster shot specifically programmed to combat the delta variant in August.

Scientists applauded the statement from HHS saying boosters were not imminent. While many researchers anticipate a third shot may be needed and agree it is essential to prepare the shots to be deployed when warranted, they argue it is far from clear when that will be.

“My opinion right now, however, is that current vaccination seems to be largely ‘holding,’ ” said E. John Wherry, an immunologist at the University of Pennsylvania’s Perelman School of Medicine. “But the companies seem to suggest that their continued follow-up of their trial patients shows concerning levels of waning of immunity. Not much of these data from the companies are publicly available yet. I agree that we need as much independent data and assessment as possible on this topic.”

Natalie E. Dean, an expert in biostatistics at Emory University’s Rollins School of Public Health, said it was important to be ready and to prepare boosters. But she said it was also crucial to distinguish between the role of the company in developing and testing whether boosters are safe and effective and the role of public health authorities in deciding when they should be launched.

“The company statement that they believe it’s needed is what created a lot of confusion,” Dean said. “Because I don’t know if they have access to different data than what we’re seeing, but what we’re seeing remains still a little murky — and also I think people can see the conflict of interest, too, for a company stating what the public needs.”

Pfizer spokeswoman Jerica Pitts did not directly respond to a question regarding assertions of a conflict of interest.

“We regularly discuss our entire research program with regulators and public health authorities in the U.S. and other countries around the world,” Pitts said.

In the United Kingdom, the National Health Service has outlined plans for booster shots to begin in September, targeted first to groups that include people who are immunosuppressed, people older than 70 and front-line health-care workers. Eventually, its boosters will be offered to people older than 50 and adults at high risk.

Some experts think boosters could be needed in the United States as soon as this fall, but others believe it could be years. Many predict that people will continue to be protected against serious cases of illness even as immunity wanes — and there is not yet a clear consensus on whether an increase in mild or asymptomatic cases will trigger policy recommendations for a third shot. Some foresee scenarios in which people in particular high-risk groups may need to be boosted sooner.

“No one is saying we’ll never need a booster, but to say we need it now and give the public the impression the vaccines are failing and something needs to be done as a matter of urgency. … The time isn’t now,” said John P. Moore, a professor of microbiology and immunology at Weill Cornell Medicine. “The decisions that are going to be made will be made by federal agencies.”

Moore expressed concern that Pfizer, which stands to benefit from selling coronavirus booster shots, was making an opportunistic announcement that could confuse people and undermine public trust in vaccines.

Pfizer announced in May that it projected global sales of its coronavirus vaccine to reach $26 billion in 2021. The company has also been frank that its current pricing — in the United States, $19.50 a shot — is temporary. On an earnings call in February, Frank A. D’Amelio, Pfizer’s executive vice president of global supply, noted that a more typical price for a vaccination was $150 or $175 per dose.

“Now, let’s go beyond a pandemic-pricing environment, the environment we’re currently in. Obviously, we’re going to get more on price,” D’Amelio said. “So clearly, there’s a significant opportunity for those margins to improve once we get beyond the pandemic environment that we’re in.”

A report by Bloomberg Intelligence analysts Sam Fazeli and John Murphy in May found that boosters could represent an $11 billion to $37 billion market each year globally. If vaccines have to be retooled to match new variants, that market could grow even more. Their modeling suggested that if Pfizer were to capture some of that business and sell more doses than currently expected in 2022, it could result in up to a 53 percent increase in the company’s operating profit.

THE MOST CRITICAL THING IS TO GET MORE PEOPLE VACCINATED.  THE FIRST TWO MRNA SHOTS ARE THE MOST IMPORTANT ONES.
Categories: Blog, COVID-19, VaccinesBy Mark ThorntonJuly 10, 2021