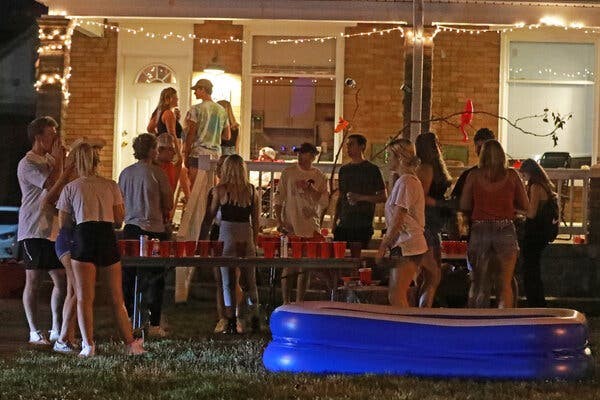 As outlined in this article in the New York Times, Covid-19 infections hit the young this summer, but that’s not where they stayed.

Virus Cases Surged in Young Adults. The Elderly Were Hit Next.

Infections among young adults eventually may have spread to older, more vulnerable people, the C.D.C. reported.

ngled in bars and restaurants over the summer, and students returned to college campuses, coronavirus infections surged among young adults.

From June through August, the incidence of the virus was highest among adults ages 20 to 29, according to research published on Wednesday by the Centers for Disease Control and Prevention. Young adults accounted for more than 20 percent of all confirmed cases.

But the infections didn’t stop with them, the researchers found: Young adults may have also seeded waves of new infections among the middle-aged, and then in older Americans.

The new data show that outbreaks linked to parties, bars, dormitories and other crowded venues are hazardous not just to the 20-somethings who are present, but to more vulnerable Americans with whom they are likely to come into contact.

College campuses have become a particular threat. According to a database maintained by The New York Times, there were more than 88,000 coronavirus infections reported on nearly 1,200 campuses as of early September.

At a congressional hearing on Wednesday, Dr. Anthony S. Fauci, director of the National Institute of Allergy and Infectious Diseases, warned against sending home students from colleges experiencing outbreaks.

Colleges “should be able to accommodate the students in a facility, maybe a separate dorm or a separate floor so they don’t spread among the student body,” Dr. Fauci said, referring to infected students. “But do not send them home to their community because of the likelihood of them bringing infection in the community.”

Millennials may also face a higher risk of infection from occupational exposures, as they represent a large portion of the workers who interact with the public in retail stores and the food service industry, as well as other frontline jobs such as child care and public transportation.

But the new study suggested they also might be less likely to adhere to recommended mitigation practices, such as social distancing and avoiding large gatherings.

“This is what we worried would happen if young adults started regathering in higher numbers,” said Dr. Tom Inglesby, director of the Center for Health Security at Johns Hopkins Bloomberg School of Public Health.

“We need to turn this around,” Dr. Inglesby said. “Leaders need to communicate better with younger people how essential they are in keeping this epidemic under control.”

He said the patterns are “yet more evidence that the concept proposed by some — cocoon the elderly, and let young people get sick because they will not have bad outcomes — will not work.”

Though it is rare, young people can become severely ill and die from the virus, as well as set off chains of infection that move into older populations. “The young and the old are all connected in our world,” Dr. Inglesby said.

She warned against demonizing young people, many of whom are filling critical public-facing jobs that expose them to the virus and living in intergenerational households that don’t make for easy seclusion.

“We can’t let moral outrage about partying distract us from addressing the occupational and household risks that continue to drive this pandemic,” she said.

The C.D.C. report examined positive test results, emergency department visits and confirmed virus cases from May to August in all 50 states and the District of Columbia.

The incidence of cases was highest among those in their 20s, but the spike in cases in this age group was quickly followed by increases in infections among people 60 and older, the researchers found.

The elderly are particularly vulnerable to Covid-19. “The young and the old are all connected in our world,” one scientist said. Credit…Mike Segar/Reuters

In the South, where cases rose drastically over the summer, a clear pattern emerged. Within nine days of an increase in cases among those in their 20s and 30s, cases also rose among those 60 and older.

Younger adults are most likely playing a significant role in spreading the virus, which can be transmitted before people know they have been infected and before they show symptoms, the researchers said.

“My message to younger adults is to understand that they may play a role in the transmission of Covid-19 to family and friends and others in their communities, and they play an important role in our ability to contain the pandemic,” said Tegan K. Boehmer, an epidemiologist and the lead author of the C.D.C. study.

Because many young adults may have mild infections, they might “be in a situation where you don’t know that you’re infectious or that you’re contagious,” especially before symptoms develop, Dr. Boehmer said. “There’s the possibility that they’re unknowingly transmitting Covid to others during this pre-symptomatic or asymptomatic state.”

Young adults are not immune to the virus themselves. Though older people make up the majority of deaths from the coronavirus, more than 5,000 younger adults between the ages of 25 and 44 have died of the virus, according to C.D.C. figures, and many more have been hospitalized with severe illness.

Another study of college transmissions, which has not yet undergone peer review, analyzed infection trends in towns with colleges and universities and determined that the reopening of schools was associated with an increase in virus cases in counties where schools were located — but only when colleges resumed mostly face-to-face classes.

“We only saw that happening where the college opened for primarily in-person teaching,” said Martin Andersen, an author of the paper, who is a health economist and an assistant professor at University of North Carolina at Greensboro.

The paper’s other authors were from Indiana University Bloomington, University of Washington and Davidson College.

Even though many university students gathered to live on or near campuses when instruction was mostly remote, they did not drive an increase in cases in those counties, Dr. Andersen said.