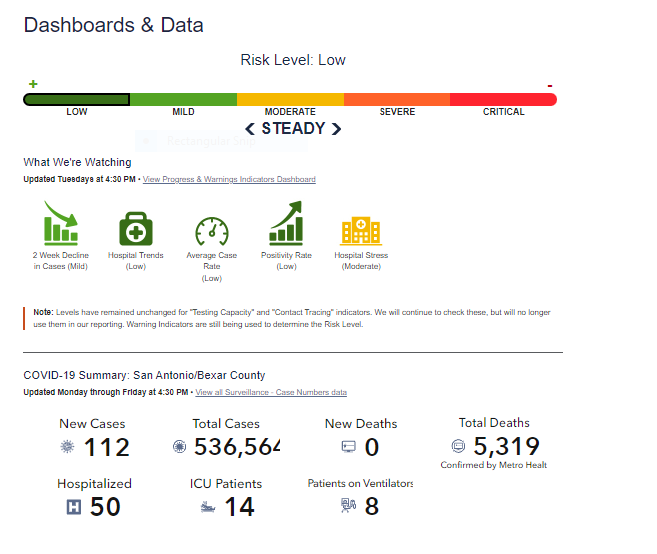 Covid 19 cases have double since last week,but are still low.  Here is some local information from the San Antonio Report followed by advice from the nation’s Covid 19 “Czar”, Dr. Ashish Jha.  I also have a tweet of his following that which gives very helpful advice when he likens a surge to a storm.

The U.S. should use this moment when coronavirus cases are relatively low to prepare for a “likely” surge in the future, according to an assessment from the new White House coronavirus response coordinator.

Monday was Dr. Ashish Jha’s first official day in the role and he takes on the job at an important time in the pandemic. Congress has yet to approve funding that would cover the cost of testing, vaccines and lifesaving treatment, and there is concern that the delay could hamper access to all three.

COVID cases have also risen slightly across the U.S. in the past week, particularly in the Northeast, after mostly trending downwards since a peak in January, with the BA.2 variant now the dominant strain.

Jha said that despite these outstanding concerns, he was happy about where the country stood in the pandemic.

“If you think about where we are, as a country, we are at a really good moment,” Jha said. “Infection numbers are relatively low. We have fewer people in the hospital right now than at any point in the pandemic.”

“We do have a lot of immunity in this country. And I think that that’s what the hospitalizations are reflecting,” she said, pointing to relatively high levels of vaccination numbers, as well as natural immunity following the recent omicron surge

Despite Jha’s optimism, the recent spread of the BA.2 variant has prompted some to reconsider health measures and restrictions.

Last Friday, Dr. Anthony Fauci, the chief medical adviser to President Biden, warned the U.S. could follow the trend of the United Kingdom and see a surge in BA.2 cases.

On Monday, Philadelphia announced that it would reinstate its indoor mask mandate starting April 18 after cases rose 50% in the previous 10 days, making it the first city in the country to announce the move.

When asked if he envisioned a wider return to pandemic restrictions, Jha said local governments had a big role to play.

“These are decisions that should always be made on a local level, so I liked that feature of what Philadelphia is doing,” Jha said. “[These decisions] should be driven really, by the realities on the ground.”

While trust in federal and state government varies across the country, Jha says “people generally tend to have a very strong relationship with their local government.”

While some Americans feel a sense of normalcy is returning to daily life, Jha said it was important for people to remember that the pandemic wasn’t over.

“We are likely to see surges in the future. We may get another variant, we don’t know,” Jha said. “That’s got to be the strategy. Not so much predicting exactly what’s going to happen when, but preparing for any eventuality that Mother Nature throws at us.”

Gandhi agreed that we can’t predict the future, but said it wasn’t entirely left to chance.

“It’s not really Mother Nature, it’s actually more that we have the tools now,” she said, noting that the White House already has a well developed strategy with their COVID-19 preparedness plan.

That plan, which was unveiled on March 2, consists of four parts:

“Since [Jha’s] now in charge of that COVID preparedness plan, I would keep on repeating the four elements of it, because I think they’re extremely powerful,” Gandhi said.