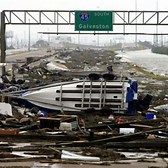 Some of you are familiar with the expression “The University of Texas stops for no storm” – the Chairman of the Board of Regents’ telegraphed response to a suggestion that UTMB close after the 1900 hurricane. “We Stop for No Storm” is the unofficial motto of Texas’ oldest medical school which was established in 1891 when Galveston was the largest city in Texas.

When Hurricane Ike hit on September 13, 2008, that motto was sorely tested.  The University sustained about $700 million in damages.  There was talk that it would never reopen and that the school would be moved to Austin.  Thankfully, the UT Board of Regents and the state legislature secured funding to reopen it.  The campus is home to the Galveston National Laboratory.  The Galveston National Laboratory (GNL) is a sophisticated high containment research facility that serves as a critically important resource in the global fight against infectious diseases.https://www.utmb.edu/gnl.  Dr. Pei-Yong Shi’s team developed a rapid neutralizing antibody test that has enabled drug maker Pfizer and its partner BioNTech to achieve the first COVID-19 vaccine to gain emergency use authorization from the FDA. The Pfizer-BioNTech vaccine has shown 95% efficacy in Phase III clinical trials.

Dr. Shi and his collaborators first demonstrated that viral mutations, such as the spike D614G mutation, enhance the transmission of COVID-19. This seminal work was published in the prestigious journal Nature in October 2020. His team has also discovered viral proteins that suppress the body’s immune response, enabling the transmission of the disease.

I was privileged to meet Dr. Shi two years ago when he spoke to a small group on his work to use Zika virus as a treatment for the most malignant of brain tumors, gliobastoma multiforme or GBM.

The following is an article from the Washington Post that mentions the research being done at UTMB on Covid 19.  My disclosure, my daughter attends UTMB school of medicine.  I am a graduate of UTMB’s SOM as was my late father. I am proud to see my alma mater’s role in helping to fight this pandemic.

Scientists are racing to better understand whether the new variants could elude vaccines.

The Pfizer-BioNTech vaccine works against a key mutation found in new, fast-spreading coronavirus variants first discovered in the United Kingdom and South Africa, and now spreading across the globe.

The finding, published late Thursday night, but not yet peer-reviewed, bolsters many scientists’ expectations that the immune response triggered by vaccines will be broad enough to counter the new, highly contagious variants.

The study showed the immunity conferred by the Pfizer-BioNTech vaccine could block a version of the virus that contained one key mutation among the ensemble of changes found in both the U.K. and South Africa variants. More experiments and direct tests of both variants in the next few weeks will bring greater clarity.

“I think this [study] is really important, because there is a lot of fear and uncertainty at the moment about this specific question,” said Shane Crotty, a vaccine and immune system scientist at La Jolla Institute for Immunology who was not involved in the study.

Crotty and other experts have suspected that the variants were unlikely to escape the broad protective response mustered by the immune system, but have been waiting to see evidence.

“It’s not surprising, but it’s been really important to see some data,” Crotty said.

The study is the leading edge of what is likely to be a flood of research that will help clarify whether the vaccines that have been authorized—and those still in the pipeline—could protect against the variants. To do those experiments, scientists take blood serum from immunized people and test whether their antibodies are still effective at blocking either the variant virus or pseudoviruses engineered to contain the same mutations.

John Mascola, director of the Vaccine Research Center at the National Institute of Allergy and Infectious Diseases, said there was a “major effort within NIH to work with the companies to do these exact tests … happening as we speak.”

The emergence of the variants has raised alarm in part because of evidence they are more contagious. The U.K. variant has already been detected in more than 30 countries, as well as in eight states in the United States. A more transmissible virus will require more people to be vaccinated to reach herd immunity—the threshold at which enough people are immune that a virus can’t spark new outbreaks.

The changing coronavirus also underscores another reason to get people vaccinated quickly, because each sick person acts as an incubator, giving the virus the chance to mutate into potentially more troublesome forms as it multiplies inside people’s cells.

The first test of the Pfizer-BioNTech vaccine against the variants happened quickly in large part because of basic science that has been going on behind the scenes for nearly a year.

Pei-Yong Shi, a molecular biologist at the University of Texas Medical Branch at Galveston, said that his laboratory had been working since early in the pandemic to create a version of the coronavirus that easily infected laboratory mice, in order to better study it. The mutation, N501Y, then emerged in the real world—detected in highly transmissible variants in both the United Kingdom and South Africa.

The variants contained other mutations, but this one was of particular concern because it sits squarely in the region the virus uses to enter cells, and in laboratory tests, it augments the viruses’ ability to latch onto cells.

Results of a first round of experiments were released by tweet, when Shi’s collaborator at UTMB, Vineet Menachery, presented data Dec. 22 on Twitter, showing the blood serum from people who had recovered from illness protected against the key mutation found in the variant.

“I would prefer this in a manuscript, but given the time of year and that I’m tired, I’ll just tweet the data,” Menachery wrote, sharing the first details of an eagerly anticipated finding in a graph.

The next big questions was whether the antibodies in the blood serum from people who had been immunized offered similar protection. Instead of waiting for an isolate from the variant virus, which Shi expects to arrive next week, they were able to run the experiment right away on the virus they had engineered for mouse experiments.

“It was quite a case of basic science anticipating what was going to happen in nature,” said Phil Dormitzer, chief scientific officer of viral vaccines at Pfizer. “It was fortuitous he had this virus to test.”

The results show that the serum from 20 patients who had received the Pfizer-BioNTech was just as good at neutralizing the virus with the mutation as the one without it. While researchers are waiting for more conclusive results from direct tests of the virus with all the mutations, it is a hopeful sign—and a call to set up a global system to track changes in the coronavirus over time, to understand where, why and how the virus is changing.

Even if the vaccines remain effective against the variants, as many scientists think they will be, there is an urgent need to track the genetic changes that could eventually elude a vaccine and require scientists to design and test new ones.

“One clear scientific message is that we need to track and study these variants in great detail,” Mascola said. “We didn’t know, a few months ago, how much variation would occur in this virus, how quickly it would occur, or what the impact of this variation would be. Now we know: A variant can emerge in a population and become dominant in a matter of weeks or months.”