The Latest on Ivermectin 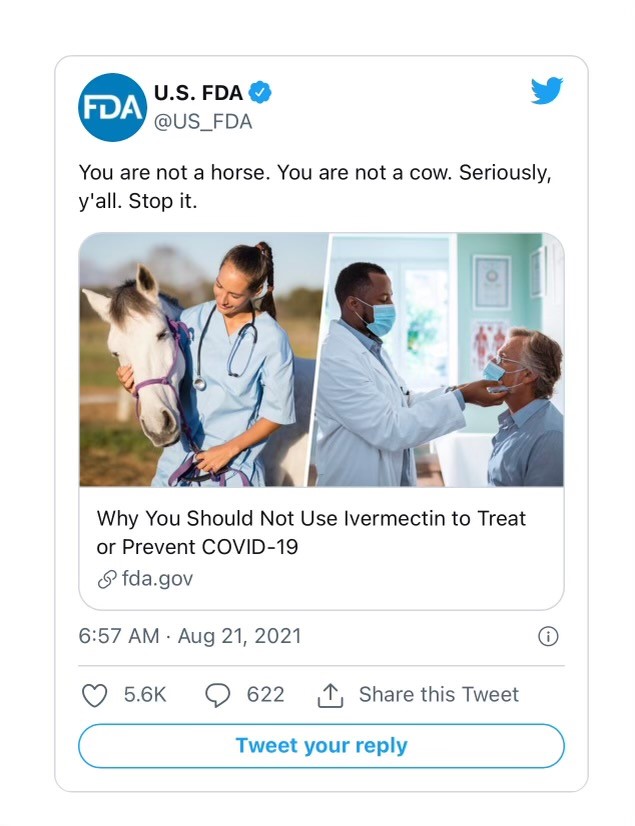 In spite of lack of proof of the efficacy in randomized controlled trials, Ivermectin has proven to be popular in some circles for the prevention and treatment of Covid 19.  It is approved for use in humans in the US as a one time dose for intestinal parasites.  The concerns of using it to prevent Covid 19 is that people will use it instead of getting a vaccine.  If used for treatment, it is used instead of an effective treatment like RegenCov.  Finally, if used on a regular basis, it can cause toxicity as the article below outlines.

The Texas Poison Center’s hotline is burning up with people concerned about overdosing on livestock dewormer used to prevent or treat a coronavirus infection.

The medicine is ivermectin, and the U.S. Food and Drug Administration is warning people not to ingest it. But despite the warning, the product is sold out at ranch and feed stores.

“Nausea, vomiting, and abdominal pain. However, you can have further problems, including mental status changes, coma, even seizures. And there have been deaths reported. No, I haven’t seen any deaths here in Texas, but these are things that are reported by the manufacturer with people who use large doses,” Varney said.

Varney said the Texas Poison Center has received 260 calls with ivermectin poisoning so far this year. He said the poisoning can be accumulative, so if a person takes multiple small doses over time, there can be a sudden overdose.

Varney said he worries about misinformation on medications people claim can treat the coronavirus.

“Let’s encourage the vaccine and avoid taking all these medications. The past few months its been ivermectin. Last year, it was hydroxychloroquine,” he said in reference to the drug used to treat malaria, lupus, and rheumatoid arthritis that was once touted by President Donald Trump to treat the coronavirus and was later proven ineffective and harmful in some cases.

“What is it going to be next week? There’s something else will come along and we’ll take its place. It’s part of the desperation for searching for a cure. But right now the best thing we have is the vaccine.”

Varney said people are calling the poison hotline after eating the dewormer and realizing that they made a serious mistake.

“I just got called the other night about a couple of cases, a family where everybody has COVID-19 and their friend gave them the Ivermectin to treat them and they react ‘Hey, might as well try it.’ But they were having temporary visual problems where they were seeing different things and losing part of their vision. So it’s just not known what happens when a human takes these very large doses,” Varney said.

On top of that, these medications are intended for animals.

“(The medications) have different carriers in them or different products to help get them in your blood stream. And they haven’t really been studied in humans either to know what the effect would be because they weren’t ever meant for humans. So there are different complications and problems that people may run into,” Varney said.