Is Ivermectin the New Chloroquine? 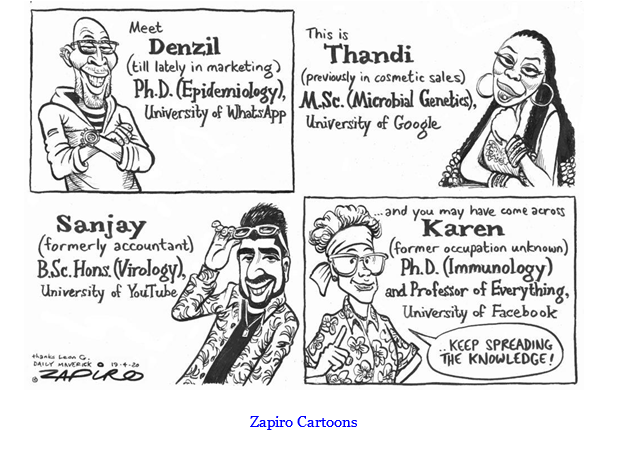 Short version:  I don’t know if ivermectin, an anti-parasitic drug, is effective against Covid-19.  Studies are in progress.  If they show it to be effective I will use it.

Background:  There has been  a lot of research into using drugs that are used for other purposes to see if they have antiviral activity and can be used against Covid-19.  These are called repurposed drugs.  The one that had garnished the most attention is hydroxychloroquine which has been proven to be ineffective in multiple randomized studies of hospitalized and non hospitalized patients.

I have previously mentioned about one of the pandemic’s curious social phenomenon, the internet epidemiologist.  These people scour the internet for news about treatments for Covid-19.  There is a lot of science available for the curious.  Bad science is plentiful, good science is harder to come by.  Unfortunately, if you aren’t trained, it all looks the same. But some people become fans of particular treatments, something that I was never aware of pre pandemic. I have been asked what I think of Ivermectin.  “It’s good for worms,” is my standard reply.

Here’s what UpToDate has to say about treating Covid 19 with ivermectin:

●Ivermectin – Ivermectin has also been proposed as a potential therapy based on in vitro (in the test tube) activity against SARS-CoV-2, but the drug levels used in vitro far exceed those achieved in vivo (those tests performed on living organisms) with safe drug doses [129]. In a retrospective review of 280 patients hospitalized with COVID-19, receipt of ivermectin was associated with a lower mortality rate; however, patients who received ivermectin were also more likely to receive corticosteroids, highlighting the potential for confounders to impact the findings of nonrandomized studies [130]. Various clinical trials of ivermectin are underway, but the only results available thus far are from low-quality unpublished trials. As with other interventions that are not supported by high-quality data, we do not use ivermectin outside of clinical trials.

It’s an indisputable fact that we need better treatments for COVID-19.

This is particularly true in the outpatient setting. Let’s count how many we have today, hmm, this shouldn’t take long. That would be zero — the same number we had over a year ago, when the disease first emerged in China.

Something safe, easy to take as a pill, and inexpensive. Something that isn’t a costly bioengineered molecule that requires lengthy infusions, given within a short time after diagnosis, to a highly contagious person.

Yes, ivermectin — the drug licensed for use against strongyloides and other parasites, and probably best known to primary providers for its off-label use for scabies and head lice, and for pet owners as a common de-worming agent.

Of course upon hearing about this “repurposed” antiparasitic drug, many will develop a weary feeling of deja vu.

Didn’t we make this mistake with hydroxychloroquine? Wasn’t excess enthusiasm for this treatment a dismal chapter in our clinical and research approach to this new disease? Enthusiasm that led to wasteful, duplicative clinical trials, flawed observational studies, and irrational prescribing with arguably more harm than benefit? Harms that included not just side effects, but also drug shortages and pointless stockpiling?

Yes to all of the above.

Note that the harm done by the hydroxychloroquine controversy continues to this day. I know investigators who led well-done, fully powered clinical trials with negative results who were, and continue to be, viciously attacked in emails and on social media. Accusations typically charge that they succumbed to pressure from big pharma, or obscured favorable study results based on political agendas, or both.

Believe me, they wanted hydroxychloroquine to work. We all did! It’s relatively safe, inexpensive, widely available — but oh well, the clinical trials showed us it didn’t do much of anything.

Now — back to ivermectin. Where do we stand today? Unlike in the spring, when hydroxychloroquine use was rampant pretty much everywhere (and even appeared in some institutions’ treatment guidelines), this poll suggests that ivermectin use now is much more restrained:

Hey #IDTwitter and other clinicians who care for people with #COVID19. Have you prescribed (or recommended) ivermectin for this disease? Please vote and comment. Thank you!
Yes
5.2%
No
62.6%
No vote just results
32.2%
2,544 votes · Final results

However, there is a strong likelihood that the group voting on this little poll does not represent clinical practice globally. An article in October cited widespread use throughout Latin America, and many commenters to the above poll mentioned similar practices in their countries. Here’s a group of mostly South and Central American clinicians strongly advocating for ivermectin therapy for COVID-19.

Furthermore, many push for broader use of ivermectin in the U.S. as well. A group called the Front Line COVID-19 Critical Care Alliance — made up of predominantly critical care clinicians — devotes much of its organization’s homepage to ivermectin’s promise for COVID-19 treatment, which they summarize in enthusiastic detail here.

Beyond these accounts, what else is out there?

The best summary of the research evidence to date appeared recently in a presentation by Dr. Andrew Hill from the University of Liverpool. In a conference hosted by MedinCell, a company developing a long-acting ivermectin preparation, he presented the interim results of a meta-analysis funded by Unitaid.

Here are some key results (posted with permission):

The risk-ratio for mortality with ivermectin was 0.17 (95% confidence interval 0.08, 0.35), an 83% reduction in risk of dying. Outcomes for other endpoints (time to viral clearance, time to clinical recovery, duration of hospitalization) also favored treatment over controls.

Andrew was kind enough to speak with me today, mentioning that additional clinical trials will be included in the final meta-analysis, and that results are confirmatory. Some studies also included inflammatory markers such as D-dimer and IL-6, with favorable outcomes seen in these endpoints as well.

The presentation appropriately cites the limitations of the meta-analysis, which include the incompleteness of the data, that some of the studies were open label, and the difference in dosing regimens and endpoints. Also — critically important — publication bias may play a role, where we’re only privy to the studies that have what he calls the “good news.”

To further muddy the waters, “publication bias” is a generous term — none of these trials have yet been published in peer-reviewed journals.

I hope I’m wrong, but I don’t believe ivermectin will work for the treatment of COVID-19 for a variety of reasons (mostly being its PK, see here, here, and here).

But of course PK studies don’t always correlate with clinical activity, and ivermectin may have anti-inflammatory activity, as shown in this animal model.

My take-home view? The clinical trials data for ivermectin look stronger than they ever did for hydroxychloroquine, but we’re not quite yet at the “practice changing” level. Results from at least 5 randomized clinical trials are expected soon that might further inform the decision. NIH treatment guidelines still recommend against use of ivermectin for treatment of COVID-19, a recommendation I support pending further data — we shouldn’t have to wait long.

But we have to guard against two important biases here. First, that because we were burned by hydroxychloroquine means that all other repurposed antiparasitic drugs will fail too.

Second, that studies done in low- and middle-income countries must be discounted because, well, they weren’t done in the right places.

So will it work? Stay tuned.