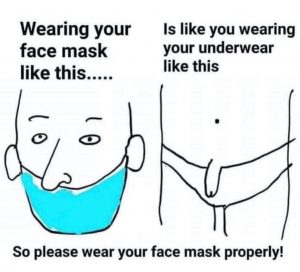 Some people like to read the journal articles themselves to see what they look like even though they may not understand all the terms.  This editorial from this week’s JAMA gives a lot of details about the different tests available and their characteristics.

The pandemic of coronavirus disease 2019 (COVID-19) continues to affect much of the world. Knowledge of diagnostic tests for severe acute respiratory syndrome coronavirus 2 (SARS-CoV-2) is still evolving, and a clear understanding of the nature of the tests and interpretation of their findings is important. This Viewpoint describes how to interpret 2 types of diagnostic tests commonly in use for SARS-CoV-2 infections—reverse transcriptase–polymerase chain reaction (RT-PCR) and IgM and IgG enzyme-linked immunosorbent assay (ELISA)—and how the results may vary over time (Figure). 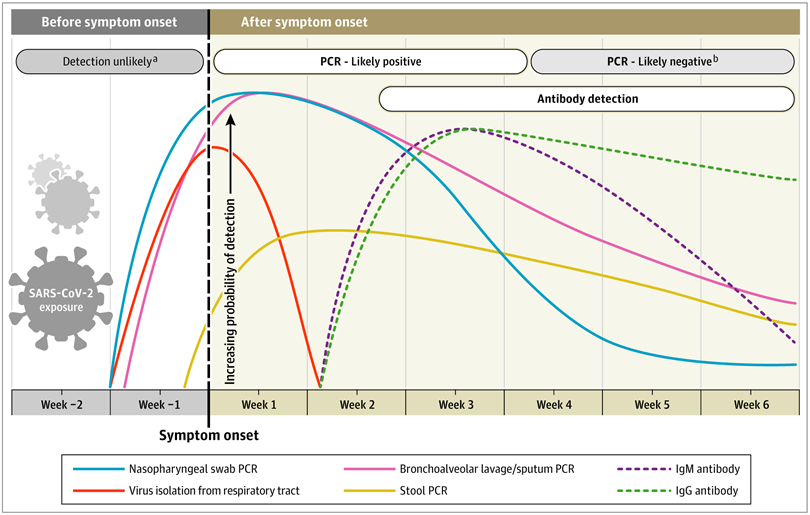 Estimated time intervals and rates of viral detection are based on data from several published reports. Because of variability in values among studies, estimated time intervals should be considered approximations and the probability of detection of SARS-CoV-2 infection is presented qualitatively. SARS-CoV-2 indicates severe acute respiratory syndrome coronavirus 2; PCR, polymerase chain reaction.

aDetection only occurs if patients are followed up proactively from the time of exposure.

bMore likely to register a negative than a positive result by PCR of a nasopharyngeal swab.

Detection of Viral RNA by RT-PCR

Thus far, the most commonly used and reliable test for diagnosis of COVID-19 has been the RT-PCR test performed using nasopharyngeal swabs or other upper respiratory tract specimens, including throat swab or, more recently, saliva. A variety of RNA gene targets are used by different manufacturers, with most tests targeting 1 or more of the envelope (env), nucleocapsid (N), spike (S), RNA-dependent RNA polymerase (RdRp), and ORF1 genes. The sensitivities of the tests to individual genes are comparable according to comparison studies except the RdRp-SARSr (Charité) primer probe, which has a slightly lower sensitivity likely due to a mismatch in the reverse primer.1

In most individuals with symptomatic COVID-19 infection, viral RNA in the nasopharyngeal swab as measured by the cycle threshold (Ct) becomes detectable as early as day 1 of symptoms and peaks within the first week of symptom onset. The Ct is the number of replication cycles required to produce a fluorescent signal, with lower Ct values representing higher viral RNA loads. A Ct value less than 40 is clinically reported as PCR positive. This positivity starts to decline by week 3 and subsequently becomes undetectable. However, the Ct values obtained in severely ill hospitalized patients are lower than the Ct values of mild cases, and PCR positivity may persist beyond 3 weeks after illness onset when most mild cases will yield a negative result.2 However, a “positive” PCR result reflects only the detection of viral RNA and does not necessarily indicate presence of viable virus.3

In some cases, viral RNA has been detected by RT-PCR even beyond week 6 following the first positive test. A few cases have also been reported positive after 2 consecutive negative PCR tests performed 24 hours apart. It is unclear if this is a testing error, reinfection, or reactivation. In a study of 9 patients, attempts to isolate the virus in culture were not successful beyond day 8 of illness onset, which correlates with the decline of infectivity beyond the first week.3 That is in part why the “symptom-based strategy” of the Centers for Disease Control and Prevention (CDC) indicates that health care workers can return to work, if “at least 3 days (72 hours) have passed since recovery defined as resolution of fever without the use of fever-reducing medications and improvement in respiratory symptoms (e.g., cough, shortness of breath); and, at least 10 days have passed since symptoms first appeared.”4

In a study of 205 patients with confirmed COVID-19 infection, RT-PCR positivity was highest in bronchoalveolar lavage specimens (93%), followed by sputum (72%), nasal swab (63%), and pharyngeal swab (32%).5 False-negative results mainly occurred due to inappropriate timing of sample collection in relation to illness onset and deficiency in sampling technique, especially of nasopharyngeal swabs. Specificity of most of the RT-PCR tests is 100% because the primer design is specific to the genome sequence of SARS-CoV-2. Occasional false-positive results may occur due to technical errors and reagent contamination.

Detection of Antibodies to SARS-CoV-2

COVID-19 infection can also be detected indirectly by measuring the host immune response to SARS-CoV-2 infection. Serological diagnosis is especially important for patients with mild to moderate illness who may present late, beyond the first 2 weeks of illness onset. Serological diagnosis also is becoming an important tool to understand the extent of COVID-19 in the community and to identify individuals who are immune and potentially “protected” from becoming infected.

The most sensitive and earliest serological marker is total antibodies, levels of which begin to increase from the second week of symptom onset.6 Although IgM and IgG ELISA have been found to be positive even as early as the fourth day after symptom onset, higher levels occur in the second and third week of illness.

For example, IgM and IgG seroconversion occurred in all patients between the third and fourth week of clinical illness onset as measured in 23 patients by To et al7 and 85 patients by Xiang et al.8 Thereafter IgM begins to decline and reaches lower levels by week 5 and almost disappears by week 7, whereas IgG persists beyond 7 weeks.9 In a study of 140 patients, combined sensitivity of PCR and IgM ELISA directed at nucleocapsid (NC) antigen was 98.6% vs 51.9% with a single PCR test. During the first 5.5 days, quantitative PCR had a higher positivity rate than IgM, whereas IgM ELISA had a higher positivity rate after day 5.5 of illness.10

ELISA-based IgM and IgG antibody tests have greater than 95% specificity for diagnosis of COVID-19. Testing of paired serum samples with the initial PCR and the second 2 weeks later can further increase diagnostic accuracy. Typically, the majority of antibodies are produced against the most abundant protein of the virus, which is the NC. Therefore, tests that detect antibodies to NC would be the most sensitive. However, the receptor-binding domain of S (RBD-S) protein is the host attachment protein, and antibodies to RBD-S would be more specific and are expected to be neutralizing. Therefore, using one or both antigens for detecting IgG and IgM would result in high sensitivity.7 Antibodies may, however, have cross-reactivity with SARS-CoV and possibly other coronaviruses.

Using available evidence, a clinically useful timeline of diagnostic markers for detection of COVID-19 has been devised (Figure). Most of the available data are for adult populations who are not immunocompromised. The time course of PCR positivity and seroconversion may vary in children and other groups, including the large population of asymptomatic individuals who go undiagnosed without active surveillance. Many questions remain, particularly how long potential immunity lasts in individuals, both asymptomatic and symptomatic, who are infected with SARS-CoV-2.

The Latest on Pets and Covid-19
October 17, 2020
Categories
Recent Articles
Go to Top