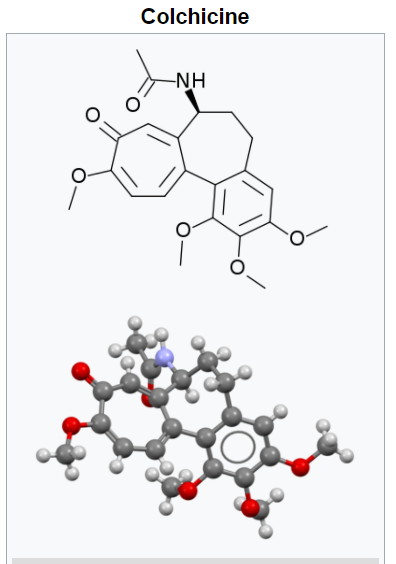 Before you ask your physician for a prescription and start hoarding colchicine, realize that the study has not been through the peer review process where experts scrutinize it’s methodology and conclusions.  Many drugs have been studied to see whether they have antiviral activity against Covid 19.  The latest is colchicine.  It is an ancient drug that has been around for centuries.  Here is some information from Wikipedia that tells the history of the drug and also why the price has sky rocketed in recent years.  Following that is a summary of the article from Lancet Journal of Respiratory Medicine. If this proves to be true, this would be an easily administered oral medication for Covid 19 for younger patients who are not candidates for monoclonal antibody infusion.

Colchicine is a medication used to treat gout[1][2] and Behçet’s disease.[3] In gout, it is less preferred to NSAIDs or steroids.[1] Other uses for colchicine include the prevention of pericarditis and familial Mediterranean fever.[1][4] Colchicine is taken by mouth.[1]

Colchicine has a narrow therapeutic index and overdosing is therefore a significant risk. Common side effects of colchicine include gastrointestinal upset, particularly at high doses.[5] Severe side effects may include low blood cells and rhabdomyolysis, and the medication can be deadly in overdose.[1] It is not clear whether colchicine is safe for use during pregnancy, but its use during breastfeeding appears to be safe.[1][6] Colchicine works by decreasing inflammation via multiple mechanisms.[7]

The plant source of colchicine, the autumn crocus (Colchicum autumnale), was described for treatment of rheumatism and swelling in the Ebers Papyrus (circa 1500 BC), an Egyptian medical papyrus.[34] It is a toxic alkaloid and secondary metabolite.[13][35][18] Colchicum extract was first described as a treatment for gout in De Materia Medica by Pedanius Dioscorides, in the first century AD. Use of the bulb-like corms of Colchicum to treat gout probably dates to around 550 AD, as the “hermodactyl” recommended by Alexander of Tralles. Colchicum corms were used by the Persian physician Avicenna, and were recommended by Ambroise Paré in the 16th century, and appeared in the London Pharmacopoeia of 1618.[36][23] Colchicum use waned over time, likely due to the severe gastrointestinal side effects preparations caused. In 1763, Colchicum was recorded as a remedy for dropsy (now called edema) among other illnesses.[23] Colchicum plants were brought to North America by Benjamin Franklin, who had gout himself and had written humorous doggerel about the disease during his stint as United States Ambassador to France.[37]

Colchicine was first isolated in 1820 by the French chemists P. S. Pelletier and J. B.Caventou.[38] In 1833, P. L. Geiger purified an active ingredient, which he named colchicine.[39] It quickly became a popular remedy for gout.[23] The determination of colchicine’s structure required decades, although in 1945, Michael Dewar made an important contribution when he suggested that, among the molecule’s three rings, two were seven-member rings.[40] Its pain-relieving and anti-inflammatory effects for gout were linked to its ability to bind with tubulin.

An unintended consequence of the 2006 U.S. Food and Drug Administration (FDA) safety program called the Unapproved Drugs Initiative—through which the FDA sought more rigorous testing of efficacy and safety of colchicine and other unapproved drugs[41]—was a price increase of 2000 percent [42] for “a gout remedy so old that the ancient Greeks knew about its effects.”[42] Under Unapproved Drugs Initiative small companies like URL Pharma, a Philadelphia drugmaker, were rewarded with licenses for testing of medicines like colchicine. In 2009, the FDA reviewed a New Drug Application for colchicine submitted by URL Pharma. URL Pharma did the testing, gained FDA formal approval, and was granted rights over colchicine. With this monopoly pricing power, the price of colchicine increased.

In 2012 Asia’s biggest drugmaker, Takeda Pharmaceutical Co., acquired URL Pharma for $800 million including the rights to colchicine (brand name Colcrys) earning $1.2 billion in revenue by raising the price even more.[42]

Oral colchicine had been used for many years as an unapproved drug with no FDA-approved prescribing information, dosage recommendations, or drug interaction warnings.[43] On July 30, 2009, the FDA approved colchicine as a monotherapy for the treatment of three different indications (familial Mediterranean fever, acute gout flares, and for the prophylaxis of gout flares[43]), and gave URL Pharma a three-year marketing exclusivity agreement[44] in exchange for URL Pharma doing 17 new studies and investing $100 million into the product, of which $45 million went to the FDA for the application fee. URL Pharma raised the price from $0.09 per tablet to $4.85, and the FDA removed the older unapproved colchicine from the market in October 2010, both in oral and intravenous forms, but allowed pharmacies to buy up the older unapproved colchicine.[45] Colchicine in combination with probenecid has been FDA-approved before 1982.[44]

Numerous consensus guidelines, and previous randomized controlled trials, had concluded that colchicine is effective for acute flares of gouty arthritis. However, as of 2006, the drug was not formally approved by the FDA, owing to the lack of a conclusive randomized control trial (RCT). Through the Unapproved Drugs Initiative, the FDA sought more rigorous testing of the efficacy and safety of colchicine and other unapproved drugs.[41] In exchange for paying for the costly testing, the FDA gave URL Pharma three years of market exclusivity for its Colcrys brand,[51] under the Hatch-Waxman Act, based in part on URL-funded research in 2007, including pharmacokinetic studies and a randomized control trial with 185 patients with acute gout.

In April 2010, an editorial in the New England Journal of Medicine said that the rewards of this legislation are not calibrated to the quality or value of the information produced, that no evidence of meaningful improvement to public health was seen, and that it would be less expensive for the FDA, the National Institutes of Health or large insurers to pay for trials themselves. Furthermore, the cost burden of this subsidy falls primarily on patients or their insurers.[52] In September 2010, the FDA ordered a halt to marketing unapproved single-ingredient oral colchicine.[53]

Efficacy of Colchicine in Non-Hospitalized Patients with COVID-19: COLCORONA trial treating non-hospitalized patients medRxiv published online January 26, 2021 COLCORONA is a randomized, double-blind, placebo-controlled comparing colchicine (0.5 mg twice daily for the first 3 days and then once daily for 27 days thereafter) with placebo in a 1:1 ratio. The clinical trial took place in nonhospitalized patients. It has been conducted in Canada, the United States, Europe, South America and South Africa. It was designed to determine whether colchicine could reduce the risk of severe complications associated with COVID-19. COLCORONA was conducted among approximately 4,500 COVID-19 patients not hospitalized at the time of enrollment, with at least one risk factor for COVID-19 complications. This is the world’s largest study testing an orally administered drug in non-hospitalized patients with COVID-19. The analysis of the 4159 patients in whom the diagnosis of COVID-19 was proven by a NP PCR test showed that the use of colchicine was associated with statistically significant reductions in the risk of death or hospitalization compared to placebo. In these patients with a proven diagnosis of COVID-19, colchicine reduced hospitalizations by 25%, the need for mechanical ventilation by 50%, and deaths by 44%. Comment: This is the world’s largest study testing an orally administered drug in non-hospitalized patients with COVID19. The study makes colchicine the world’s first oral drug that could be used to treat non-hospitalized patients with COVID-19. Currently, the list of outpatient therapies that work for COVID-19 includes convalescent plasma and monoclonal antibodies, which require infusions, must be started very early after symptom onset. We await peer review of this online publication. Effect of anakinra versus usual care in adults in hospital with COVID-19 and mild-to-moderate pneumonia (CORIMUNO-ANA-1): a randomised controlled trial Lancet Resp Med published online January 22, 2021