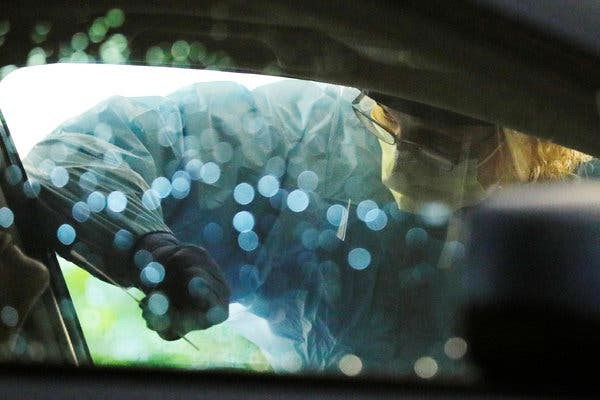 I have been pondering this for months.  What percentage of patients infected with Covid-19 have no symptoms?  The bottom line is that we don’t really know.  This became controversial in a statement from the WHO yesterday suggesting that disease transmission from asymptomatic individuals was rare.

World Health Organization officials on Tuesday clarified some widely reported comments about the likelihood of asymptomatic transmission of SARS-CoV-2.

The WHO recommends fabric masks in the community when there is community transmission and social distancing can’t be maintained. This can reduce the likelihood of asymptomatic transmission.

Elsewhere, in MMWR, the CDC reports on the outbreak aboard the aircraft carrier the U.S.S. Theodore Roosevelt. The risk for SARS-CoV-2 infection was lower among service members who said they had worn a face covering (56% vs. 81% who didn’t), avoided common areas (54% vs. 68%), and observed social distancing guidance (55% vs. 70%). Among those with an antibody response, 59% had neutralizing antibodies, which could indicate at least short-term immunity.

There are conflicting studies as mentioned in this summary of an article in the Annals of Internal Medicine from Journal Watch.

Prevalence of asymptomatic disease: An estimated 40–45% of people who test positive for SARS-CoV-2 do not have symptoms at the time of testing, according to a narrative review of 16 cohorts in the Annals of Internal Medicine. In four cohorts with longitudinal data, few of the asymptomatic patients (0–10%) went on to develop symptoms. But in one skilled nursing facility, 89% of initially asymptomatic patients became sick. The researchers say, “It is imperative that testing programs include those without symptoms.” They add, “The early data that we have assembled on the prevalence of asymptomatic SARS-CoV-2 infection suggest that this is a significant factor in the rapid progression of the COVID-19 pandemic.”

Some of the patients who have no symptoms eventually develop them and are therefor pre-symptomatic.  Some don’t have many symptoms and are minimally symptomatic.  Don’t expect a definitive resolution of this in the near future.

As the study done on the SS Theodore Roosevelt shows, wearing face masks reduces the risk of acquiring the infection.  This may be an additional reason to wear masks and continue social distancing.