Do I Need to Worry About Polio? 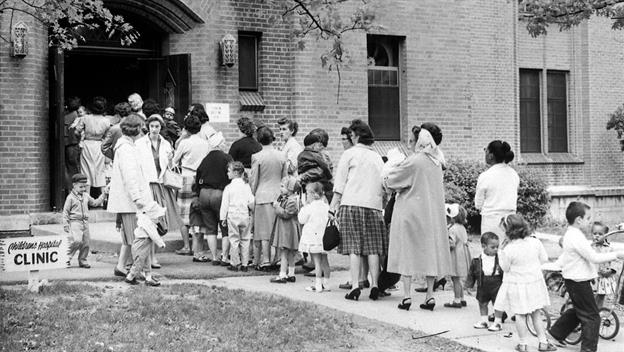 This is a photo of mothers lined up with their children to get an experimental polio vaccine in the 1950s.

First Covid 19, then Monkey Pox, now polio?  Do I need to worry?  No.  Not at this point.  Most of us have been immunized against polio.  You may not remember getting it, but your school wouldn’t admit you if you didn’t show proof of immunization. Anti vaxxers do need to be concerned if they have refused to allow their children to be vaccinated.  This is how the problem has arisen in Rockland County, New York.  Here is an article from today’s Wall Street Journal which summarized the problem.    The CDC’s advice on who might need additional polio vaccine follows that.  In this country we no longer use the oral polio vaccine because some people shed a weakened virus in their stool which can infect unimmunized or immunocompromised individuals.

A 2014 illustration made available by the U.S. Centers for Disease Control and Prevention depicts a polio virus particle.PHOTO: ASSOCIATED PRESS

The virus that causes paralytic polio has been found in New York City sewage samples, according to city and state health departments.

Health officials said Friday the finding suggests “likely local circulation of the virus,” which was recently detected in Rockland and Orange counties, both of which are north of New York City.

The highly transmissible poliovirus is typically spread when a person comes into contact with another person’s infected feces and then touches their mouth. Many people who contract the virus are asymptomatic, according to the U.S. Centers for Disease Control and Prevention. Some develop flulike symptoms.

Poliovirus is what causes paralytic polio, which can cause permanent paralysis of a person’s legs and arms. In some cases, it can lead to death, according to the health departments.

“Polio is entirely preventable and its reappearance should be a call to action for all of us,” Dr. Vasan said.

Earlier positive samples from Orange and Rockland counties were genetically linked to a confirmed polio case in Rockland County revealed in late July, according to genetic sequencing analyzed by the CDC. The person confirmed to have contracted the poliovirus developed symptoms including weakness and paralysis starting in June. The person, who was unvaccinated against the virus, wasn’t contagious as of last month.

The person had a vaccine-derived strain of the virus, said Matthew Pullen, an assistant professor of infectious diseases and international medicine at the University of Minnesota’s medical school.

People with these types of cases shed a weakened version of the virus for anywhere from two to eight weeks, Dr. Pullen said. If there is low immunity in the population, the virus can infect more people and keep circulating, he said.

A global effort to eradicate the poliovirus has taken decades and required an expensive public-health campaign. After decades of work, the virus had been wiped out almost everywhere in the world. The Covid-19 pandemic halted efforts.

Traces of the virus have been found recently in a few countries that have long been free of the serious illness. British health authorities this week launched a polio booster vaccination campaign for children in London after the virus was found in the city’s wastewater system.

The poliovirus is most common among children. Most people develop flulike symptoms or no symptoms at all, but the virus can infect the brain or spinal cord and cause paralysis and sometimes death.

Detecting the virus in wastewater is, in and of itself, some evidence of community spread, according to Dr. Pullen. But, he added, those vaccinated against the poliovirus don’t have much to worry about.

The polio vaccine is included in the CDC’s standard child-immunization schedule, and it is required in New York to attend school, unless a child has a medical exemption. Most adults in the U.S. were vaccinated as children, according to the CDC.

—Brianna Abbott contributed to this article.

However, adults who are unvaccinated, incompletely vaccinated, or are at higher risk for exposure to poliovirus should receive polio vaccination. Higher risk situations include:

Recommendations for poliovirus vaccination for adults will depend on previous records of polio vaccination and the time available before protection is required.

Adults who are unvaccinated or without any documentation of previous polio vaccination should be given three doses of IPV at these recommended intervals:

Adults who are incompletely vaccinated or previously received one or two doses of polio vaccine (either IPV or tOPV) should receive the remaining doses of IPV to complete the three-dose series at the recommended interval:

If the adult has received Dose 1, and

If the adult has received Dose 2 and

Adults who have had three or more doses of polio vaccine in the past and are at higher risk of exposure to poliovirus can get one lifetime booster dose of IPV.

In some circumstances, when there is not enough time to give three doses of IPV according to the above recommended intervals, then an accelerated schedule can be used:

If the accelerated schedule cannot be completed before the potential exposure to higher risk situation, the remaining doses should be given as soon as possible (e.g., in the visited country, or upon returning home) to complete the primary series at the recommended intervals, such that the third dose should be given at least 6–12 months after the second dose if that is possible.

There are no known risks to getting IPV at the same time as other vaccines.

For more information, see the ACIP recommendations for polio vaccination.

In summary: Travelers going to certain parts of Africa and Asia may be at risk for polio. Everyone should be up-to-date with their routine polio vaccination series. In addition, a one-time adult polio vaccine booster dose is recommended for previously vaccinated travelers to certain countries NEW YORK CITY OR ROCKLAND COUNTY, NEW YORK.
Categories: COVID-19, Prevention, Uncategorized, VaccinesBy Mark ThorntonAugust 13, 2022